Skip to content
Plat4mation–Back to out-of-box–Do you need a new instance? 5 Questions to rate your ServiceNow performance

Do you need a new instance? 5 Questions to rate your ServiceNow performance

Having trouble with your ServiceNow performance or implementing new features or functionality? Then this might indicate you’ve gone down the path of over-customization in the past on your ServiceNow instance. In the early ServiceNow releases, a lot of the current functionality wasn’t developed yet. As a result, ServiceNow customers (or their implementation partners) added custom functionality to meet their demands. This has resulted in instances with complex webs of custom-built code, applications and APIs. Typically, these instances are difficult to upgrade and/or implement new features in.
This is due to what we call ‘technical debt’. To get rid of this technical debt, ideally, you should re-implement ServiceNow entirely. So you can start afresh with a new, out-of-the-box (OOTB) instance and directly unlock all new functionality.
But that sounds quite drastic, no? Wouldn’t reverting the customizations be more sensible? To explain why this won’t work, we’ll compare it to scrambled eggs. Once scrambled, you cannot make the eggs whole again. The same goes for your instance. Furthermore, once your instance is cleaned up, you still won’t have access to all new functionality after upgrading. But let’s not get ahead of things. Lets first determine if you are really in need of a new instance by answering the following 5 questions.

What time do you spend on half-yearly ServiceNow upgrades versus future development?

Let’s take the upgrade to San Diego, which has recently been released (see the release notes here). Ideally, this should take 2 weeks or less including testing. If it takes you anywhere between 8 and 15 weeks, that ain’t good! Spending this much time means 15-30% of your development capacity is used for updates. Time your developers cannot spend on actual development. The reason it takes up so much time is regression testing. With a new OOTB instance, pushing changes suddenly becomes 75% faster and cheaper!

On top of that, valuable FTE time is wasted and users and customers don’t get to enjoy the new platform features straight away. Furthermore, upgrading often involves change freezes that can hinder productivity. Thus, the longer the upgrade takes, the bigger the impact. A lengthy upgrade process that has become too complex, is usually paired with frustration too and sometimes ends in starting all over again. Or even worse, if you perform only one upgrade a year because it’s so hard!

At one of our customers, 12 or 15 people were required to perform daily support. With the OOTB instance, they only need 2 people for support and the rest is now working on future developments.

How long does it take to load forms both in your front- and back-end?

Find the ServiceNow performance dashboard at the bottom right of the user interface screen (see screenshot below) and investigate. How does yours score? If you have recorded response times upon first implementation, compare them to now. If responses have become significantly slower—caused by adding too much custom functionality—you need a new instance.
Why? Because the next generation of consumers are used to high-speed technology. These millennials have higher expectations than older generations. They expect pages to load in just a few seconds and forms that are quick and easy to fill in. If this is not the case, they simply leave. The same goes for your ServiceNow performance. If it’s not up to par, people get frustrated and working with the platform suddenly becomes a nuisance.

Tip: Another way to assess platform performance is to request a free, high-level HealthScan from ServiceNow. In no time, you’ll know what state your instance is in (see below)! Contact us if you’d like to know more about the ServiceNow HealthScan. 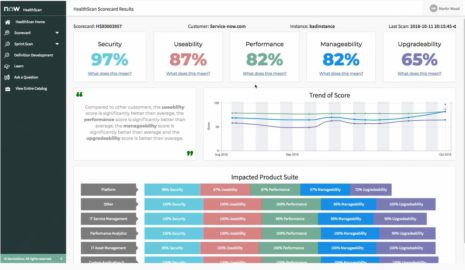 How often are you admiring new features like Mobile, Virtual Agent or Agent Workspace but not able to take advantage?

Implementing a new feature could be as quick as a 10-minute task if you have OOTB. It should really be that easy! If this sounds surreal to you, this is a good indication that your instance is in bad shape. Starting fresh would be the most cost-efficient option here, also in terms of enhancement release time. Generally speaking, a new feature should take you 1 to 2 weeks and a project (a new module) a month or two.

One of our customers, an enterprise with 10,000 users/employees, wanted to implement the HRSD module. Due to instance over-customization, this was not possible. When they went back to out-of-the-box, it took us only 8 weeks to implement HRSD including a multi-lingual portal.

What is the average time or steps required to resolve a case, change or incident?

To answer this question, let’s first investigate the amount of effort it takes to fill in the related forms. Look at the number of mandatory fields for each form. If your forms require a user to fill out 20 fields versus 5 out-of-the-box, that’s bad. Forms with that many steps cause lag and hinder productivity.

If you implemented ServiceNow, let’s say, pre-Geneva , it is really difficult to change to the new ITIL-based state model (read ServiceNow’s tips here). If you haven’t introduced this new model yet, you’re missing out on new OOTB features like CAB workbench, Standard Change Catalog, etc. And you’ll most likely experience upgrade difficulties. If you did introduce the new model but had to customize it, then you’re facing (possible) bad performance and maintenance and upgrade difficulties.

One of our customers had a change management flow of 120 steps (!). Compare that to OOTB, which has around 20 steps (ish)! An added advantage of a new instance is that it decouples processes that should not be combined in the first place. This keeps things simple.

Help, I'm in need of a new instance!

If you have concluded that your ServiceNow performance is under par, replacing your entire instance may sound daunting. Because how on earth are you going to convince your CXO/CIO/CTO that the investment is worth it? After all, they could easily argue why you would repair something that is working fine? Let us help you build that business case, supporting you with pragmatic calculations that will explain why it is worth the investment. Because, for one, your instance is broken. Two, a new instance will save your company tons of money. Three, it opens up a world of new opportunities. And four, it needs to happen sooner or later, so why wait?

In terms of project scope, it’s good to know it’s relatively easy to move to a new instance, there’s no hindrance involved and it starts paying off right away. Thanks to our one-of-a-kind approach, which is really unique in the market, we can implement a fresh instance for large enterprises in as little as 7 sprints (14 weeks) for MVP go-live. The star of our approach is our custom integration builder Connector4U. This application allows you to keep working in your current instance while we stand up the new instance. This also means you can start reaping the benefits of the new instance right away. Quick successes and wins in the early phases of the project will also make sure we get your organization on board and excited. It’s our mission to not only change the technology, but change the way the platform is perceived in the organization.

At one of the largest global ServiceNow customers, the new OOTB instance we implemented is already paying off big time. Their platform maintenance costs dropped to 1/3 of what they used to be. Time, resources and user experience were positively impacted, and they were able to scale down their DevOps teams and saw a decrease in training efforts of 10,000 days per year (!).

ServiceNow, the ServiceNow logo, Now, Now Platform, and other ServiceNow marks are trademarks and/or registered trademarks of ServiceNow, Inc. in the United States and/or other countries. Other company names, product names, and logos may be trademarks of the respective companies with which they are associated. 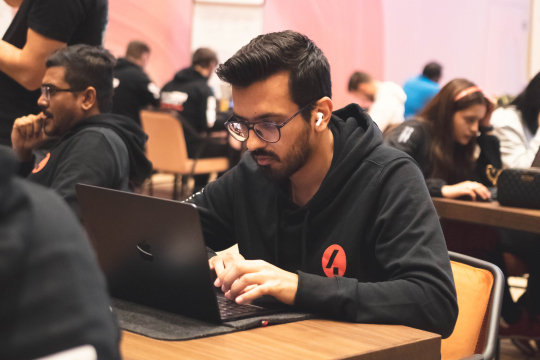 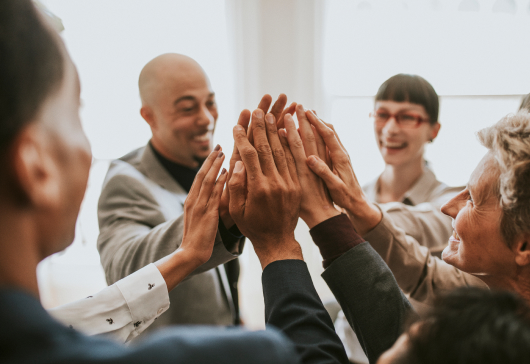 7 key principles that make your ServiceNow implementation a success

5 Things that will improve your customer service